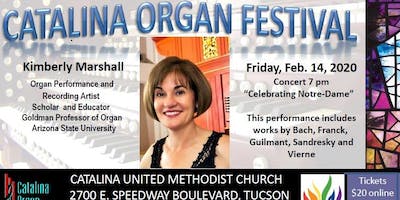 The devastating fire at Notre-Dame Cathedral in April 2019 focused world attention on the fate of the large Cavaillé-Coll organ in the west gallery.  [Miraculously, the instrument was not significantly harmed by the heat or water, so this icon of French culture will survive to edify future generations.] In her concert for the Catalina Organ Festival, Kimberly Marshall will pay homage to this influential organ culture, with works by Franck, Guilmant, and Vierne. Filling out the program will be music by Bach and a newly commissioned piece by Margaret Sandresky.   A native of Winston-Salem, North Carolina, Kimberly Marshall began her organ studies with John Mueller at the North Carolina School of the Arts in 1974. Her early interest in French music took her to France where she worked with Louis Robilliard (1978-79) and Xavier Darasse (1980-81) before returning to North Carolina to complete her undergraduate studies with Fenner Douglass in 1982.

In 1998, Kimberly was appointed Associate Professor of Music at Arizona State University, where she oversees the graduate organ studio and presides over the instrument by Paul Fritts (1992). She was promoted to an endowed position as Goldman Professor of Organ in 2002 and served as Director of the School of Music from 2006-2012.  ​ ​Kimberly Marshall has been invited to play throughout Europe, including concerts in London's Westminster Cathedral and St.Paul’s Cathedral; King's College, Cambridge; Notre-Dame, Paris, and Chartres Cathedral; Uppsala Cathedral, and the Dormition Abbey in Jerusalem.  She has performed on many historical organs, such as the Couperin organ at Saint-Gervais, Paris, the Gothic organ in Sion, Switzerland, and the Cahmann organ in Leufstabruk, Sweden.  She especially enjoys tailoring programs to the styles of the instruments she plays, as is evident from her recordings of Italian and Spanish music on historical organs.  Her interpretations are informed by research into obscure repertoire and performance practice, although she does not limit herself to early music.  While at Stanford and the Royal Academy of Music, she gave performances of organ works by Ligeti in the presence of the composer, and she has been an advocate for music by Margaret Sandresky, Dan Locklair and Ofer Ben-Amots.  She is attracted to the organ by its vast possibilities of timbre and complex development since its invention in the third century BCE.  Her work reflects this enthusiasm for musical creativity and historical awareness.   She is an experienced adjudicator, having served on the jury of the National AGO competition in 2008, of the Sweelinck competition in Amsterdam in 2010, and the Pistoia International Organ Competition in 2013.  She was chair of the jury for both the Northern Ireland International Organ Competition in 2012 and the Westfield Center’s Organ Competition in 2013.  Kimberly has numerous publications reflecting her eclectic interests.  She has lectured on her research for the American Musicological Society, the Royal College of Organists, and Trinity College, Dublin.  Her edition of articles on female traditions of music making, Rediscovering the Muses, was published by Northeastern University Press in 1993.  She contributed entries for the Grove Dictionary of Music 2000 and for the Oxford Dictionary of the Middle Ages (2012). Her anthologies of late-medieval and Renaissance organ music were published by Wayne Leupold Editions in 2000 and 2004. ​ ​ .

More Events For You